Christmas is celebrated around the world. The colder seasons bring about many opportunities to celebrate friends, family, harvest, and warmth as we mark the end of the year and the beginning of a new one. Christmas festivities and celebrations typically begin in December and end in mid-January.

Historically, when we had no electricity, the dark came much sooner and so was forced to live through darker days for a whole season. Behold, the winter celebrations! To break up the darkness, friends, family, and community come together to celebrate each other and to do some serious merry-making to help get through the rest of the dark season.

Around the world, countries, and cultures celebrate Christmas in their own unique way.

Here is a few worth mentioning.

Las Posadas translates to English as “The Inns,” referencing the inn from the Nativity in the Christian religion.

Beginning on December 16th, this nine-day celebration represents the nine months of the Virgin Mary’s pregnancy. The celebration ends on December 24th. The nine days reflect those days of hardships that Mary and Joseph faced while searching for shelter on their journey to Bethlehem.

Each evening for nine days, there is a small parade leading through the streets of the town, led by a child dressed as an angel. Most of the attendees are children dressed in silver and gold robes carrying lit candles and pictures of Mary and Joseph on a donkey. Musicians accompany the procession as they visit homes to ask for refuge, only to be turned away at each one. While symbolically refused, each home does offer refreshments for the participants, as carols are sung and scripture read. On Christmas Eve, there is a mass held and children break open piñatas in celebration of the birth of Christ.

Credited for starting the Christmas Tree tradition, Germany is the original Christmas Town! First used during the middle ages and brought in the house on Christmas Eve, mothers secretly decorated a tree while the children slept. Gifts are also exchanged on Christmas Eve.

Famous around the world for the German Christmas Markets, one can find all kinds of foods and ornaments for the holidays. You will find the traditional Nutcrackers there and the famous hand-blown glass ornaments that Germany is known for!

In this part of the world, birds are given special attention in Scandinavia during Christmas. To help them through the cold days, Bird Trees are erected. A tall pole is placed out in the yard, a wheel attached to the top, and sheaves of wheat and corn are placed there for the birds. Or, as shown in the image below, wheat can be bunched together and tied to the pole as well.  Additional seeds, nuts, and grain are placed in sheltered areas for the birds, such as windowsills, walls, and under the roof. 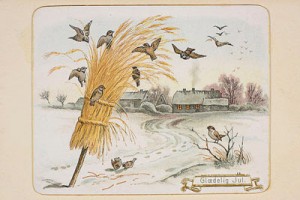 photo from the National Library of Norway

According to folklore, offering birds a feast will bring you good luck in the new year. Start spreading some birdseed around the outside of your home!

Is a proverb true and tried;

To the waiting poor outside;

And remember the birds, and the song they sang,

When the year rolls round again:

“The Christ-child came on earth to bless

The birds as well as men.”

Christmas in the Irish world

Traced back to Roman times when candles were lit at the mid-winter festival to symbolize light returning after the winter solstice, the people of modern Ireland place a large candle near a window in their homes. The family’s youngest member lights the candle on Christmas Eve to guide strangers as the star guided a very pregnant Mary and Joseph (the Holy Family).

Christmas is celebrated by gift-giving, spending time with family, and going to church. You may also find “star singers” caroling as they walk behind a huge star on a pole.

St. Stephen’s Day is on December 26th. This day is also called the Day of the Wren. An Irish tradition known as the Wren Boys Procession takes place where children go singing door to door, holding a stick topped with a wren (nowadays a fake wren). It’s an especially popular ballad from the old days which tells a tale of a wren who betrayed St. Stephen to the Roman soldiers. St. Stephen became the first Christian martyr. The procession asks for money for the “starving wrench”, which goes into the pockets of the kids.

Associated with the old year, the wren is the ‘King of the Birds.’ As the king of the birds, the wren had an important place in the Celtic druidic religion.

Interestingly, this is a Christian holiday that was merged with ancient pagan rituals. Pre-dating Christian times, “Hunting the Wren” is another Irish tradition where the tiny bird is captured, killed, and tied to a pole. Traditionally, local musicians and dancers would dress in disguises and go house to house collecting money, food, and drink for some serious merry-making. If that house didn’t donate to the cause, the wren is buried outside their door – bringing one year of bad luck. The tamer modern version of this is what is now the Wren Boys Procession.

The Wren, the Wren the king of all birds,

St. Stephenses day, he was caught in the furze.

Although he is little, his honour is great,

Rise up, kind sir, and give us a trate.

We followed this Wren ten miles or more

Through hedges and ditches and heaps of snow,

We up with our wattles and gave him a fall

And brought him here to show you all.

For we are the boys that came your way

To bury the Wren on St. Stephenses Day,

So up with the kettle and down with the pan!

Give us some help for to bury the Wren!

No matter where you are this Christmas, or how you celebrate, make it your own, and may all of the light and blessings of the season and new year shine upon you and your family!

Register to use our app

Sign up as a Service ProviderTake control over your time and earn more money doing it.
Sign up as a Senior or Family memberFind professional and affordable service providers that will give you peace of mind.

We started with our marketplace focussed on home care and are expanding into other services to address a wider range of senior needs.  If you're looking for something other than home care, please peruse but check back often as we will be expanding the number of choices available within each service category soon!

Give Us a Call